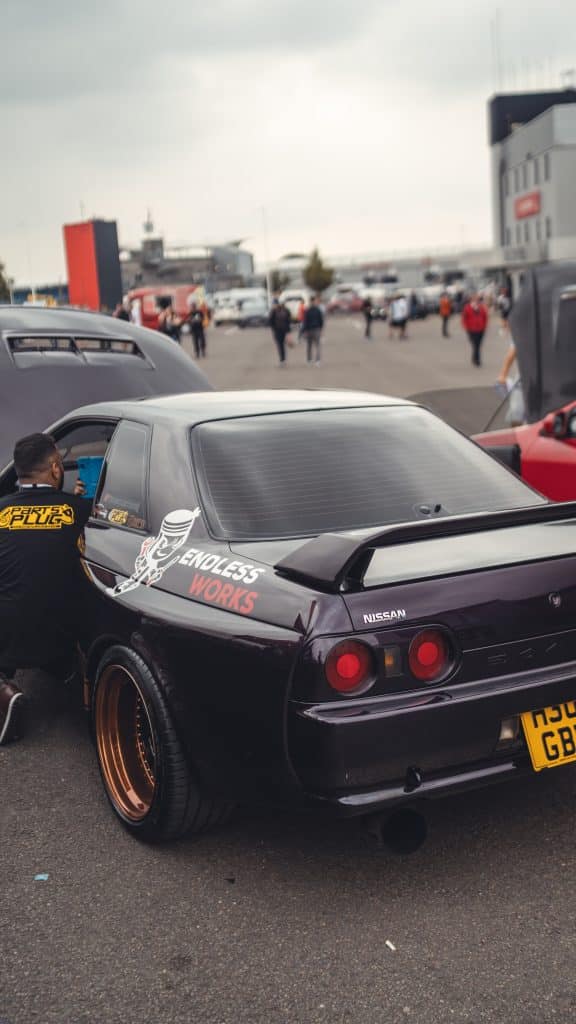 A little about Silverstone :

Silverstone Circuit is a motor racing circuit in England, near the Northamptonshire villages of Silverstone and Whittlebury. It is the current home of the British Grand Prix, which it first hosted as the 1948 British Grand Prix. The 1950 British Grand Prix at Silverstone was the first race in the newly created World Championship of Drivers.The race rotated between Silverstone, Aintree and Brands Hatch from 1955 to 1986, but settled permanently at the Silverstone track in 1987. The circuit also hosts the British round of the MotoGP series. (Full article in Wikipedia)

Europe’s biggest Japanese car show – Japfest is for the serious enthusiast with all day edge-of-the-seat track action; this show never ceases to amaze and is jam-packed with live entertainment throughout the day.

Our visit to Silverstone on the Turbo Zentrum Stand:

Our 1000bhp  demo car was showcased on the main sponsor stand of Silverstone’s Jap Fest 2021. With one of few Skyline R32’s at Jap Fest we stood out with our super extensive build. Below you’ll find a 1 Minute preview of the sponsorship stand and other cars that were also on stand!

ALL PARTS ON THIS CAR ARE SUPPLIED BY US! PLEASE DO NOT HESITATE TO CONTACT US FOR MORE INFORMATION OR TO DISCUSS YOUR BUILD.

THANK YOU FOR VIEWING!

We use cookies on our website to give you the most relevant experience by remembering your preferences and repeat visits. By clicking “Accept All”, you consent to the use of ALL the cookies
Cookie SettingsAccept All
Manage consent